5 Reasons Why Node.js is Better for Web App Development in 2018

In the history of web development technologies, we’ve never seen a technology like Node.JS becoming mainstream this quickly. Today, Node.JS has become the go-to-technology for all kinds of businesses and companies.

According to 2017 User Survey Report, Node.JS has about 7 Million users with a 100% growth rate on yearly-basis. And not only that, but Uber, LinkedIn, Netflix, and even NASA has tested and embraced Node.JS for some time now.The Node.JS Foundation also revealed that 98% of Fortune 500 companies use Node.JS on regular-basis. And, 96% of IoT companies prefer using Node.JS for IoT application development.If, on the other hand, you’re still not convinced with using Node.JS for your next web app development project, listen to what Jeff Harrell, chief Architect and Direct of Engineering at Paypal, has to say:

“We started using Node.JS as a prototyping platform but later moved to using it in production. And while doing so, we witnessed that we needed 33% lesser lines of code, handled 2x requests per second, and reduced response time by 35% compared to our old Java version.”

All these statistics clearly proves that Node.JS is definitely taking the web market by storm. But, if you’re still not convinced yet, let’s get to specific reasons why Node.JS is better for web app development in 2018.

5 Reasons to Use Node JS for Web App Development: 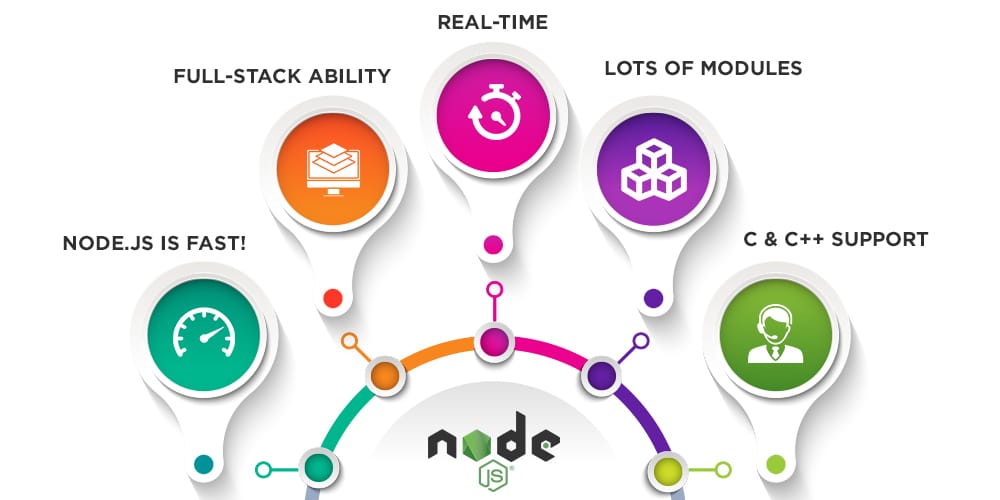 In today’s fast paced world, enterprises are in awe of the speed at which Node.JS performs. For those who don’t know, Node.JS runs on V8 engine built by Google that turns JavaScript into native machine code and performs at high speed.Unlike other JavaScripts, Node.JS uses a single thread in which the event loop takes care of all asynchronous I/O operations. This has allowed enterprises to develop robust web applications quickly that can manage parallel connections with higher throughput.As a matter of fact, many global enterprises have benefited in a great way with this feature. For example, LinkedIn migrated from Ruby on Rails to Node.js for the sole purpose of their mobile traffic, which also reduced their number of servers from 30 to 3. Additionally, the Node.JS migration also made their application 20x times swifter.That’s quite a feat, don’t you think?

Developers can write JavaScript for both, client-side as well as server-side in Node.JS, making it easier to transport data between the two to coordinate the working simultaneously.In simple terms, the data changes done at server-side appears immediately at client-side, and the web page that displays those data automatically makes the updates.The best part?This also eliminates the need of hiring separate developers for front-end and back-end development, making the process fast at lower costs. A good example for this is Paypal

Gone are the days of low-level sockets and protocols. With Node.JS you can develop real-time web application just in the same time needed to develop a simple blog using PHP.The event-driven architecture that we talked above, caters to both server as well as client side, making synchronization process fast and neat. Plus, the event loop that works on TCP web socket protocol also handles the multi-user function and block overhead of HTTP in real-time web app development.Overall, Node.JS is definitely a winner when it comes to multi-user, real-time web application development.

Node.JS is an open-source platform that encourages sharing. In fact, the community has been so much active that there are over 400,000 modules available on Github and Stackoverflow which can be found by Node Package Manager’s official website.

Lastly, NodeJS also supports C as well as C++ programming languages to speed up the processing. The add-ons in Node.JS are dynamically-linked & shared objects, programmed in C++, making it possible to load them into Node.JS through require() function.

If you’re looking to develop a web application, especially a real-time web app, then Node.JS is the best JavaScript framework. Apart from this, Node.JS is also perfect for creating APIs and handling multi-user requests which depends on I/O.All in all, if you’re on a tight budget for building a complex web app, Node.JS is the right key to your web development project success.

TopDevelopers.co, a San Francisco based dedicated directory of B2B IT service providers’ platform has released a list of top Laravel Development Companies from across the globe to help their enterprise customers choose the best partner for their Website development. The announcement was made on 27th of July, 2021 and the list was published on various […]

We all have been hearing about the new WordPress 5.0. It was announced a few months ago that a big change wouldbe coming in the WordPress platform and that it was scheduled to be released sometime in 2018.Finally, on 6th December 2018, the WordPress 5.0 was launched. This is a major update that is expected […]